To Bee or not to Bee? There is no question for the millions who make an appointment to view one of TV’s most unlikely success stories.

When The Great British Sewing Bee debuted in 2013, nobody could have predicted this search for the nation’s best home needleworker would prove such compulsive viewing.

Yet year by year its popularity has grown, and now coronavirus has led many more to discover the joy of sewing.

‘We were blown away by the ratings,’ says host Joe Lycett, 32, of the last series which attracted more than 6 million viewers.

‘Moving to BBC1 was a great honour and that obviously helps, but so has the pandemic. Sewing Bee really captures what people need. It can be soothing and inspirational, and people fall in love with the contestants.’ 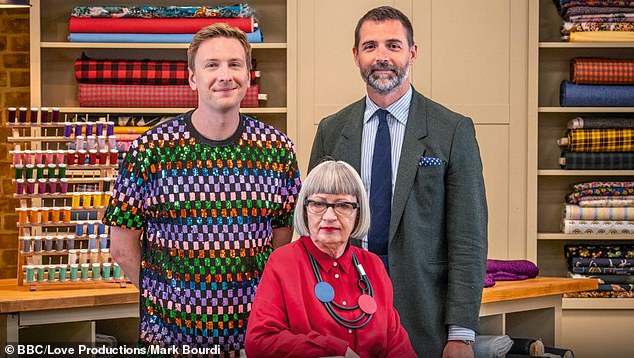 The Great British Sewing Bee is back after its popularity grew amid lockdown. Host Joe Lycett (above, with Esme Young and Patrick Grant) said he was ‘blown away’ by ratings for series six

Even so, that’s a truly extraordinary number of people to be watching sewing. ‘It really is,’ agrees judge Patrick Grant, 48. ‘But the show has always been very warm, very inclusive and very positive. We provide an hour of escape into a world that’s overwhelmingly joyous.’

Research shows that sewing decreases stress and increases happiness, and sewing machines and dressmaking paraphernalia sold out across the UK last year as people were inspired to give it a go.

‘It’s really good for mental health,’ says judge Esme Young, 72. ‘And you feel such satisfaction when you’ve made something.’ Perhaps GPs should prescribe sewing. ‘Absolutely,’ she nods. ‘We should get on to the NHS.’

And now there’s fresh inspiration to be had as Sewing Bee returns. The seventh series features a dozen hopefuls aged 21 to 62, including a primary school teacher, a former dinner lady and a beauty therapist.

Each episode sees the amateurs face three tasks. First they make an article of clothing from a pattern. Then the transformation challenge sees them turn an item into something new. Finally they must achieve a flawless fit on a real-life model in the made-to-measure challenge.

‘We do one this series with wetsuits, which are pretty hard to work with,’ laughs Patrick. ‘And one of my favourites was denim.’

There were restrictions, of course. Filming was moved to a more spacious warehouse at London’s Trinity Buoy Wharf (you may recognise it as where Pierce Brosnan’s speedboat crashes through a restaurant in the Bond film The World Is Not Enough). There were regular tests, and the contestants lived in a bubble. 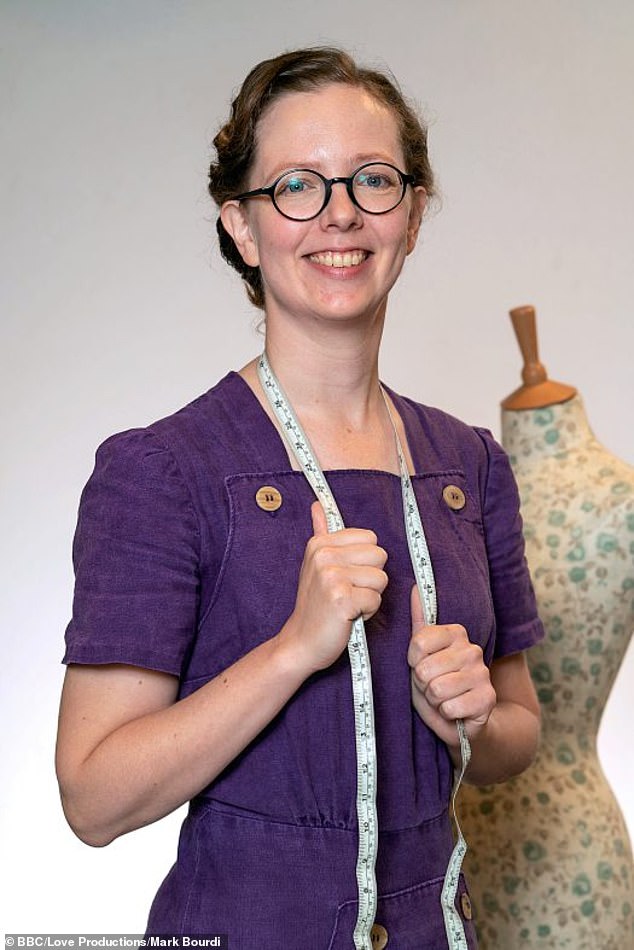 Last year’s winner, respiratory medicine consultant Clare (pictured), and her fellow contestant Ali, a paramedic, have been working on the Covid frontline

‘They were in the same hotel, so there was a strong bond,’ says Joe. ‘But there are strong bonds every year. I’m in WhatsApp groups for each of the three series I’ve hosted – they always create a community – and they’re still going every day. But this year it felt like a real family thing.’

Last year’s winner, respiratory medicine consultant Clare, and her fellow contestant Ali, a paramedic, have been on the Covid frontline. Have their pals been supportive?

‘Hugely,’ says Joe. ‘I love them all. They’re such good eggs. Clare’s been really helpful with me. I got Covid in the first lockdown and recovered fine, then had problems in summer. I was essentially using her as a professional lung doctor.

‘I had fluid on my lung. I’ve got asthma and was a bit breathless, so they did all these scans and the doctor said, “If Covid didn’t exist I wouldn’t know how to diagnose this because your symptoms don’t really fit with anything that existed before.” It does such weird things to bodies. But I’m fine. I’m the healthiest I’ve been in a long time.’

Long seen as the George Clooney of the sewing room, Patrick attracted a host of new admirers on social media last year.

‘Nobody asked me out,’ says Joe. ‘It was always, “Can you send me Patrick’s number?” I’m like a conduit to get to Patrick. I’m his love life agent. If you want a date with Patrick, you go through me.’

Clothes maketh the man, as they say, and as creative director of Savile Row tailors Norton & Sons, Patrick is always impeccably dressed.

‘Except on one sketch in this series,’ laughs Patrick. ‘Joe transformed into me and I into him – sparkly shoes, the lot. This is peak eye candy for the BBC. Watch out!’