The riverboat captain is a storyteller, and Captain Don Sanders will be sharing the stories of his long association with the river — from discovery to a way of love and life. This a part of a long and continuing story.

It’s been another quiet week on the river. At least on the surface (no pun intended). Although a few rumors were passing around about another “Tall Stacks” and the possibility of a former gambling boat coming to the Cincinnati riverfront “one of these days,” much of the small talk among boatmen and women was directed at resolving this perplexing question: 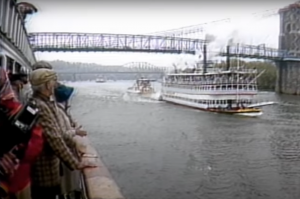 “Just curious, “ a boatman asked, “but were the steamboat races rigged?”

“Just curious,” a boatman asked, “but were the steamboat races rigged?”

The former crewman creating the dilemma worked on the steamboats at least a couple of decades after I ate my last hot biscuit in the crew’s mess, so his impression of a “steamboat race “ was likely different than what I recall.

Back in my dorm room, during the second semester of ‘63, WEKY Radio, the local college station, made an announcement that the steamboats BELLE of LOUISVILLE and the DELTA QUEEN were fixing to run a boat race during the festivities leading up to the Kentucky Derby’s “Run for the Roses” traditionally held on the first Saturday in May at Churchill Downs in Louisville, Kentucky.

According to a later track publicist reflecting on that first event:

“The first Great Steamboat Race in 1963 was proposed as a way to raise awareness for the recently purchased BELLE OF LOUISVILLE – and help pay for much-needed renovations to the boat.” 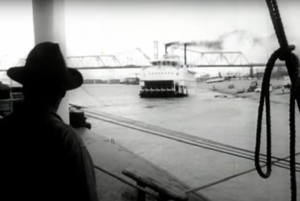 BELLE of LOUISVILLE – the former tramp excursion boat had sold downriver to Louisville where it ran local jaunts under the ownership of the city/county metro-government.

Though I nearly fell on the floor when I heard the news blurb about the proposed race between the two steamers close to my heart, I immediately realized I had to be in the Falls City when the steamboats lined up for the starting gun to fire. In those days before expressways, Louisville was well over a hundred miles from the Richmond dorm. Without a car or even a driver’s license, my only means of getting there was by “sticking out my thumb.” Still, I harbored no doubts that I would be standing on the Louisville waterfront in time to ride one or the other steamboats in the first “Great Steamboat Race.”

As I hitchhiked more than my share in those seemingly saner days, I knew I had to look dapper when I reached the steamboat landing. Though I worked as a deckhand on the BELLE when she was called the Steamer AVALON during the 1959 and 1960 seasons, the former tramp excursion boat had sold downriver to Louisville where it ran local jaunts under the ownership of the city/county metro-government. Following the sale, the former captains of the AVALON, Captains Ernest E. Wagner and Clarke “Doc” Hawley left to command the DELTA QUEEN — so if I were going to get aboard either boat, it would have to the DELTA QUEEN.

As the QUEEN was considerably more “stuffy” than my former steamboat, I wore the best clothes hanging on the pipe in my dorm room closet. The besuited look likely encouraged several drivers to stop and pick me up, with the last who hustled me to the riverfront in ample time before the steamboats departed for the starting line. 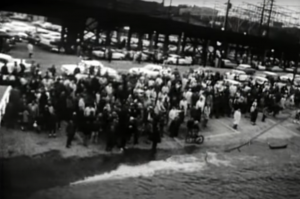 Throngs lined the Riverbank — Race Day, 1963, was nasty, damp, and bone-chillingly cold, with temperatures hovering in the 40s. But the weather failed to deter an eager crowd estimated at a “quarter-million” from lining the riverbanks on both sides of the Ohio River.

Race Day, 1963, was nasty, damp, and bone-chillingly cold, with temperatures hovering in the 40s. But the weather failed to deter an eager crowd estimated at a “quarter-million” from lining the riverbanks on both sides of the Ohio River. As the bitter wind whipped up whitecaps around where the DELTA QUEEN lay snubbed onto the old cobblestone grade, a group of former AVALON employees huddled around the end of the Landing Stage harboring the same intentions as myself. We all wanted free passage on the QUEEN for the race compliments of our former bosses. The gathering of the ragged remnants of the AVALON crew apparently caused a dilemma within the DELTA QUEEN hierarchy until word came directly from Mrs. Letha Greene, Owner, that “no one would be allowed to board the QUEEN without a ticket.”

My heart sank as did those of my former mates standing around me until a familiar woman’s voice sang out:

Unbelievably, it was Mrs. Rosile Wagner, Captain Wagner’s lovely wife, who had been my friend since we met during my first year aboard the AVALON four years earlier. As Mrs. Wagner made that fateful declaration at the head of the stage where we disappointed crewmen were gathered, she held out her arm and thrust her ticket into my hand. Without looking back, I accepted Mrs. Wagner’s generous gift, hurried across to the Main Deck, and followed her up the front stairs to the main cabin where I blended in with the other favored revelers. 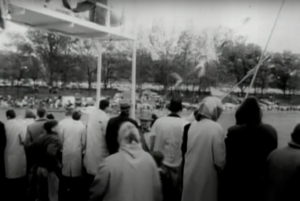 I accepted Mrs. Wagner’s generous gift, hurried across to the Main Deck, and followed her up the front stairs to the main cabin where I blended in with the other favored revelers.

The DELTA QUEEN easily won the first race while the BELLE experienced many problems that time would eventually resolve. But of all the “Great Steamboat Races” that continue to the present with the non-steamer, the BELLE of CINCINNATI, filling in for the DELTA QUEEN since 2009, none have been as exciting and so well attended as that first race on the blustery damp day in ‘63.

Miss Effie Brown, a beloved, long-time constituent of the DELTA QUEEN staff, was featured in a film by Sentimental Productions recalling:

“I think one of the best times I really ever had [on the DELTA QUEEN] was when… we had the first race… I never screamed and hollered so hard in all my life.” 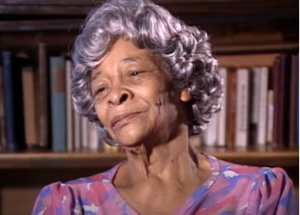 Effie Brown: ‘I never screamed and hollered so hard in all my life.’

In the same film production, the late Pat Sullivan, one of the QUEEN’s most ardent fans, added:

“My favorite time to be on the DELTA QUEEN is when she is racing against the BELLE of LOUISVILLE. That one day, to me, is the greatest steamboat day of all days.” 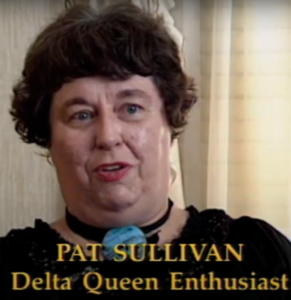 Pat Sullivan added: “My favorite time to be on the DELTA QUEEN is when she is racing against the BELLE of LOUISVILLE.’

To answer the younger steamboatman who posed the initial question, “Were the Steamboat Races rigged?” I have to admit that during my time as Master and Mate aboard the DELTA QUEEN, I was never privy to any order, let alone a suggestion, that it was the turn of either the BELLE or the QUEEN to win or throw any certain steamboat race. I do know that neither boat wanted to run away with a race all hell-bent-for-leather to smash the other in a resounding defeat without first putting on a good show for the spectators. But when it came down to the finish line, both steamboats did their best to cross first.

As what went on, race-wise, after I left the DELTA QUEEN Steamboat Company, I haven’t the faintest notion. Perhaps that is a question the younger crewman and those serving aboard the boats in those later years can continue to ponder, and, possibly, they will agree on a definite conclusion.

But, a fact of life remains….

“All is fair in love and war… and steamboat races.” 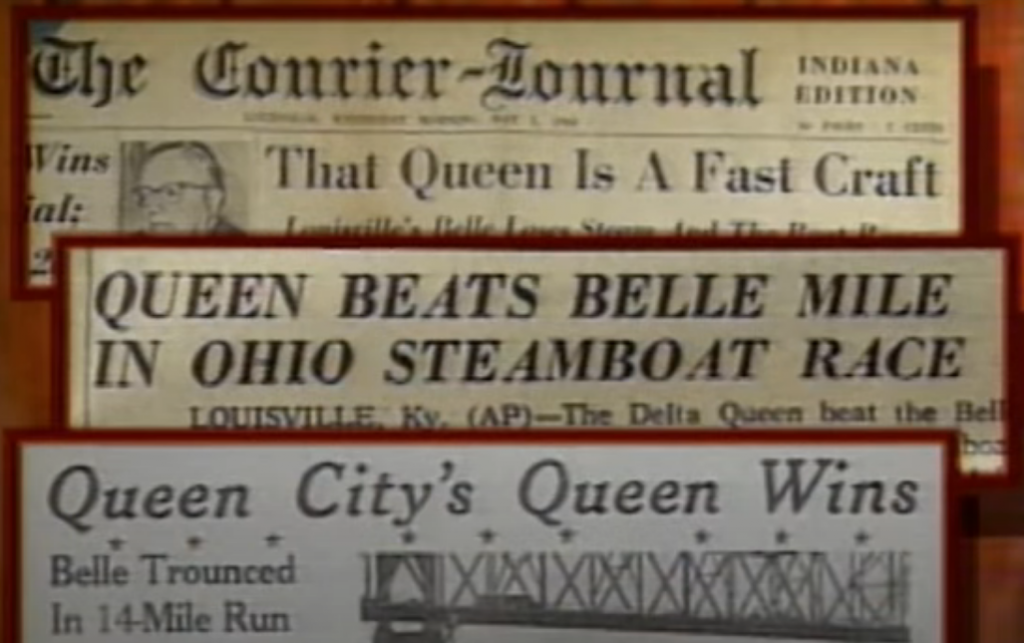 The DELTA QUEEN easily won the first race while the BELLE experienced many problems that time would eventually resolve.

Captain Don Sanders is a river man. He has been a riverboat captain with the Delta Queen Steamboat Company and with Rising Star Casino. He learned to fly an airplane before he learned to drive a “machine” and became a captain in the USAF. He is an adventurer, a historian, and a storyteller. Now, he is a columnist for the NKyTribune and will share his stories of growing up in Covington and his stories of the river. Hang on for the ride — the river never looked so good.