A Kamloops high school is once again in the spotlight for the wrong reason, but this time it has nothing to do with COVID-19.

Students at NorKam secondary walked out of class on Wednesday afternoon, protesting the alleged discrimination of a classmate a day earlier who was sent home because of the outfit she was wearing.

Karis Wilson, a 17-year-old student at the school, told Castanet Kamloops she was pulled out of class Tuesday and told to change her outfit because it was “too distracting.”

The topic went viral on social media Tuesday and, by Wednesday morning, students had planned a walk-out.

“We think it’s right to advocate for other girls that this happens too,” said Avery, a student at NorKam.

About 50 students were showing their support to Wilson and other girls at the school who have accused the teaching staff of similar behaviour.

In response to the online outrage, SD73 sent out the following statement:

Wilson told Castanet some NorKam teachers have expressed support for her situation.

Students at a Kamloops high school walked out of class on Wednesday, a day after their classmate was sent home after being told her outfit was “distracting.”

The walkout at NorKam secondary took place at 2 p.m. About 50 students, many holding signs, streamed out of the school to protest the treatment of their classmate Karis Wilson, who was sent home on Tuesday after being told her clothes were inappropriate for school.

“It overwhelms me to see how many amazing women are here supporting me.”

Wilson said she was blown away by the viral response to her situation.

“I knew it was wrong when it happened, right away, but I didn’t think it would be like this.”

On Tuesday, Wilson was sent home after being told her outfit — a black dress on top of a white turtle neck — was “distracting” her female teacher and male teaching assistant. Her dad, Chris Wilson, took to TikTok to complain about the situation and his post went viral, receiving more than 100,000 likes.

SD73 issued a statement on Wednesday saying it is looking into the situation. 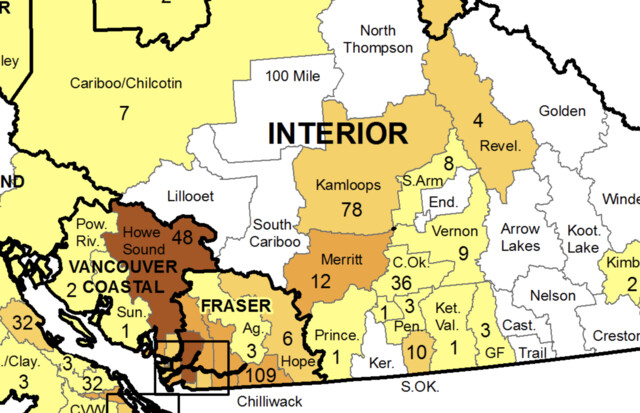 According to data released Wednesday by the B.C. Centre for Disease Control, the Kamloops local health area recorded 78 positive COVID-19 cases between Feb. 14 and Feb. 20 — down from 116 the previous week and 161 the week before that.

Last week’s number is more in line with numbers recorded in the area prior to last month’s surge in cases. In early January, the Kamloops LHA recorded weekly new case counts in the 60s. The number shot up in mid-January and remained high until recently.

Regionally, cases remain high on a per capita basis in Merritt, which recorded 12 confirmed positives last week. On the other hand, 100 Mile House, the site of a significant COVID-19 cluster in recent weeks, recorded zero new cases last week, according to the BC CDC data. 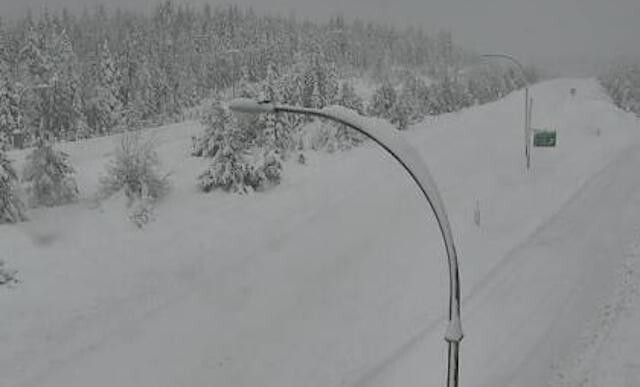 A winter storm warning has been issued for the Coquihalla.

A winter storm warning has been issued for the Coquihalla Highway.

Environment Canada has issued a warning for the Coq between Hope to Merritt, with up to 30 cm of snow expected by Friday morning.

“An approaching frontal system will move inland tonight and across the B.C. Interior on Thursday. Snow is expected to begin tonight then become heavy at times through Thursday. Snowfall amounts near 30 cm can be expected by Friday morning,” a statement on the Environment Canada page said.

“Weather in the mountains can change suddenly resulting in hazardous driving conditions.”

A winter storm warning and snowfall warning has also been issued for Highway 3 from Kootenay Pass to Paulson Summit.

For the Okanagan Valley there is a 60 per cent chance of flurries mixed with rain. 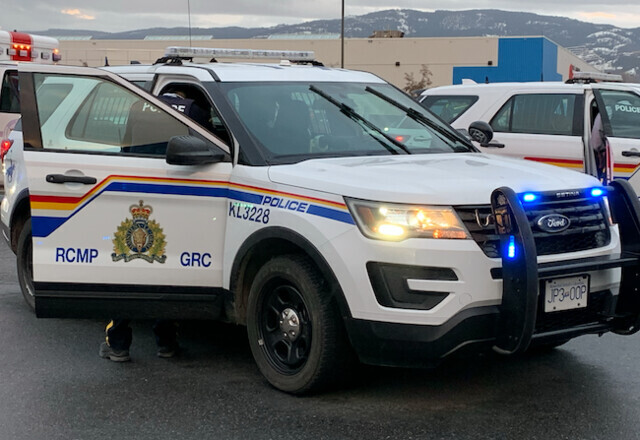 Kamloops Mounties are warning the public after a potentially scary situation in Brocklehurst last week.

According to police, a student was walking home on Friday in the 900-block of Southill Street when she noticed someone who appeared to be following her.

“She returned to her school, running, and eventually lost sight of the man,” RCMP Cpl. Crystal Evelyn said.

The potential suspect is described as a white man with a medium build standing about six feet tall with a grey beard to his chest. He was wearing a red jacket and a green checkered cap.

Evelyn said no other suspicious reports were received by police.

“This is a great example of a student who was alert, aware of her surroundings and did all the right things by going back to her school and finding a trusted adult to help,” RCMP Cpl. Donna Napier said in a news release.

“As the weather warms up and more kids start walking to and home from school, it’s a good time to review safety tips with them.”

Mounties suggest parents or guardians make sure children know their address and how to contact a parent, as well as how and when to call 911 in case of emergency. Families are encouraged to set up a code word to use in emergencies to identify a safe person other than a parent or caregiver.

Police also suggest kids walk in pairs or groups and avoid conversations with or rides from strangers. 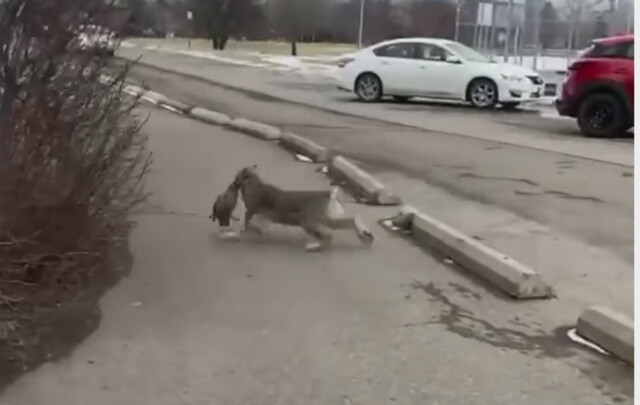 A video of a wildcat catching a duck at McArthur Island Park on the North Shore has been viewed tens of thousands of times on social media.

Wildfowl and hunting social media company Split Reed posted the video on their social media channels, with many, including members of Kamloops community facebook pages, subsequently sharing the post.

Bobcats and lynx have been spotted numerous times throughout Kamloops this winter, with BC Conservation Officer Services confirming the cats are coming into the city in greater numbers this year due to a naturally low prey cycle. 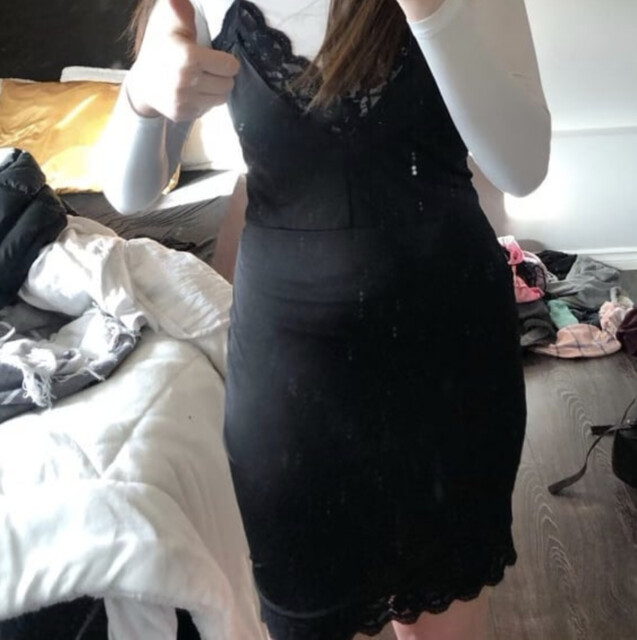 NorKam Grade 12 student Karis Wilson was sent home from NorKam secondary on Tuesday, told this outfit was too distracting.

Parents of students at a Kamloops high school are upset with the alleged handling of a perceived wardrobe issue on Tuesday that is going viral on social media.

A Grade 12 student at NorKam secondary was sent home on Tuesday, according to multiple posts on social media, told her outfit was not appropriate for school. She was wearing a black dress on top of a white turtle neck.

Chris Wilson took to TikTok on Tuesday to share his 17-year-old daughter’s story.

“She was told the outfit she was wearing made or could make her or the teacher’s assistant, who was a male, feel uncomfortable, so she was removed from class,” he said in a video posted to TikTok.

“My daughter walks home in tears. … I can’t even explain how disappointing it is that in 2021 a teacher would centre a student out and say, ‘What you’re wearing is making people uncomfortable.’”

Other parents appear to agree.

“This is not OK,” Bethanie Frank wrote on Facebook.

“My son attends your school and I do not want your staff to perpetuate and role model rape culture and the shaming and sexualization of females for what they wear. … If adults are feeling bothered by that outfit on a child, get them out of my child’s school. They have an issue and it’s sickening.”

Castanet Kamloops has reached out to SD73 for comment. District spokeswoman Diana Skoglund said a statement is expected to be released later in the day on Wednesday. 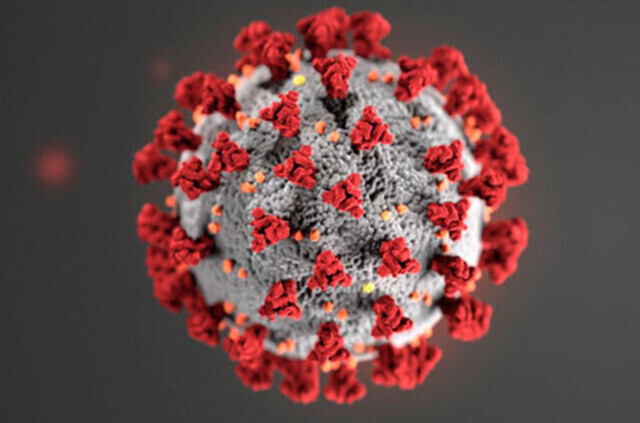 New COVID-19 exposure events have been reported at more Kamloops secondary schools, as well as one elementary school.

According to Interior Health, Norkam secondary school is reporting a possible COVID-19 exposure between Feb. 18 and Feb. 19. A possible exposure event at Beattie elementary took place on Feb. 17 and Feb. 18.

Previously, at South Kamloops secondary school, possible exposure to COVID-19 occurred over seven days at the beginning of February.

Sa-Hali secondary school is the fifth school on Interior Health’s list, with a potential exposure on Feb. 16. This is Sa-Hali’s seventh COVID-19 exposure since class resumed in January. 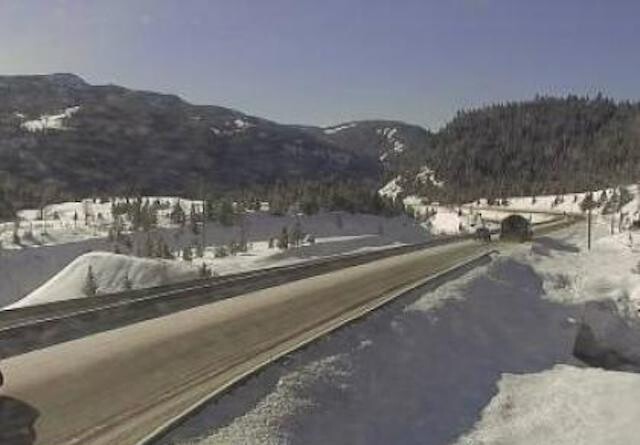 Another incident is tying up traffic on the Coquihalla Highway.

According to DriveBC, a vehicle incident south of Merritt is being assessed as of Wednesday morning.

The incident is believed to be near the Murray Bridge.

This story will be updated when more information becomes available. 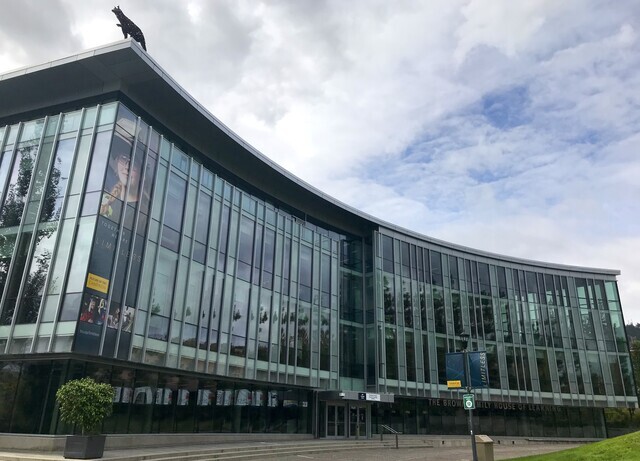 Sukh Gill has resigned from the board of governors at Thompson Rivers University.

In a statement from TRU Wednesday morning, the board of governors thanked Gill for his service over the last two years and said no further comment will be provided.

Gill’s resignation comes a week after reporting from Kamloops This Week detailed the spending habits of the former Thompson Nicola Regional District CAO.

According to the newspaper, as CAO, Gill spent more than $500,000 in taxpayer money between 2015 and 2020 on significant expenses, including high-end dining and hotels. 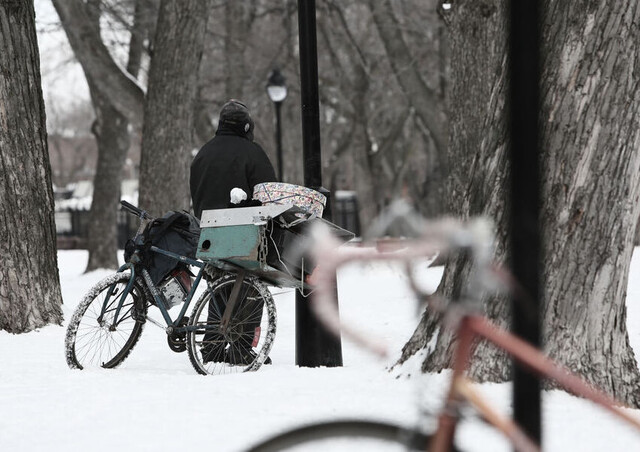 Two separate notices of motion were announced in Tuesday’s city council meeting with the intent of addressing Kamloops’ social issues.

The motions were brought forward by Coun. Bill Sarai and Coun. Dale Bass.

Mayor Ken Christian called a special meeting on Tuesday, March 2 in order for council to discuss both motions.

“The bulk of the notice of motion is to address the lack of wrap-around services,” Sarai said.

Sarai’s motion suggests that any new supportive housing built in Kamloops would need to commit to providing services like mental health and addictions counselling to their clients.

Housing projects would also need to have a nurse and security on staff.

The motion seeks to prompt discussions among senior staff around the need for an increase in detox beds and sobering centres in the city.

If passed by council, Sarai’s motion would also see a review completed on the outcomes of supportive housing projects in Kamloops, the impact these projects have had on the community, and the outcomes for the individuals accessing housing.

The motion would also have 24/7 security patrols in the Tranquille business corridor and the downtown area until the city’s community services program, formerly bylaw services, is fully staffed and ready to transition into the role.

Bass told Castanet her new motion has the same goals, but took into account feedback given by the other council members.

The motion would suggest expanding storage facilities for those experiencing homelessness, and looking at long-term temporary housing options for individuals with complex needs.

Bass said she requested the special council meeting to discuss the motions, along with Coun. Sarai.

After council discussion on the last motion addressing social issues, Bass said some of the councillors felt the conversation was good, but they wanted more.

“I think there’s a desire by council to do something,” she said.

“I actually expect to see parts, not all, but parts of both of our notices of motion approved next time. Or if not that, then at least referred to the Community Services Committee to investigate further.”