PARIS — It seems that Jay Z is having the last laugh in the Champagne battles.

Fifteen years after founding his Armand de Brignac prestige range following a public spat with the owner of Cristal Champagne, the entertainment mogul has sold a 50 percent stake in the company to LVMH Moët Hennessy Louis Vuitton, joining a portfolio of prestigious brands including Dom Pérignon, Moët & Chandon, Ruinart, Krug and Veuve Clicquot.

With the partnership, which includes a global distribution agreement, LVMH is cementing its ties with the entertainment industry, and extending its reach into the high end of the Champagne market, after a year in which sales of French bubbly fell by a fifth due to the coronavirus pandemic. Financial terms of the deal were not disclosed.

The deal represents the ultimate seal of approval from a traditionally conservative and insular milieu, where Shawn “Jay Z” Carter made waves with his striking gold bottles decorated with pewter Ace of Spades labels, appealing to a global and diverse customer base.

Philippe Schaus, chief executive officer of Moët Hennessy, the wines and spirits division of LVMH, said the luxury conglomerate headed by mega-billionaire Bernard Arnault was impressed by Armand de Brignac’s ability to challenge the rules of the Champagne category.

“We had been following its success over the last few years and we thought, this is crazy. Most Champagne brands see very modest growth, and he was just shooting up through the ranks,” he told WWD in an interview in Moët Hennessy’s new offices located above the LVMH-owned department store Le Bon Marché.

Following an introduction from Arnault’s son Alexandre, who was recently named head of product and communications at U.S. jeweler Tiffany & Co., Bernard Arnault and Schaus met with Carter at his $88 million mansion in Los Angeles.

“We tasted the Champagne and we said, yes, there is something to be done together, because obviously he doesn’t have the same distribution network as Moët Hennessy,” Schaus recalled.

“We are already global leaders with our prestige Champagne brands — Dom Pérignon, Krug and the prestige cuvées of Veuve Clicquot and Ruinart — but Armand de Brignac has created another niche and in some respects revolutionized the prestige category, so we wanted to be part of that,” he added. “They opened Champagne to a new clientele, so in that sense, it’s a great complement to our portfolio.”

In an internal video aimed at Moët Hennessy’s teams, Carter said the partnership felt like a natural next step.

“I couldn’t think of anyone else or a better partner for this brand, Armand, that we built from scratch,” he said. “When we started this, the only goal was to build something that would last longer than us, stand the test of time, build something of the utmost class and taste, so you guys are perfect partners.” 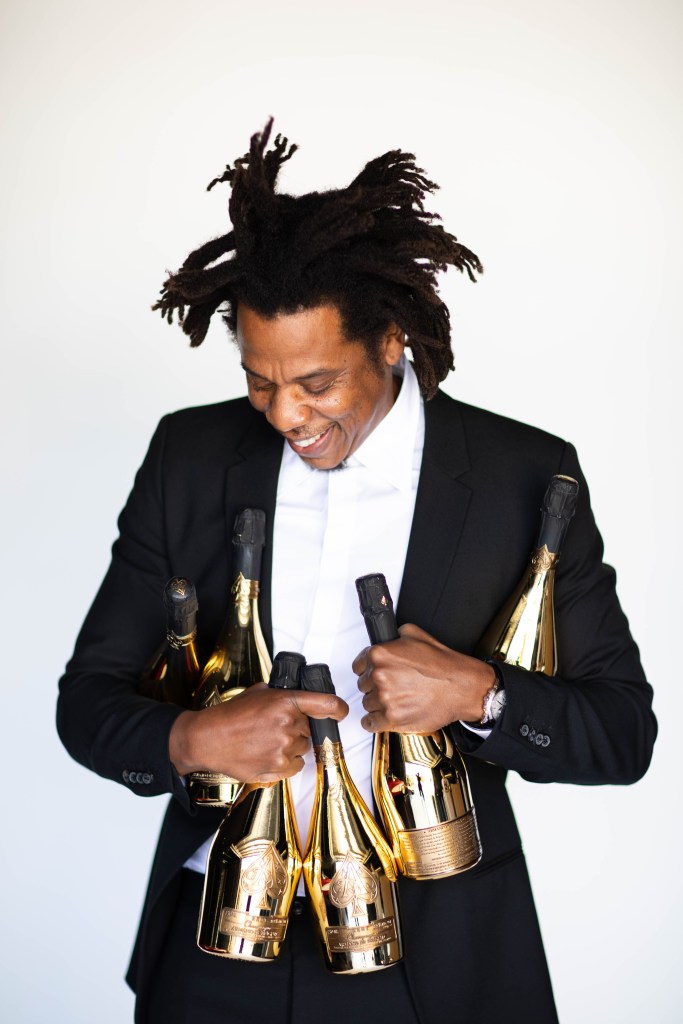 Under the 50-50 structure of the deal, Carter and Moët Hennessy will have equal say in future decision-making.

“We’re super excited to take this brand to the next level, as well as other ideas,” Carter said. “We’re excited and can’t wait to meet you guys in person, and looking forward to learning and hopefully bringing some new energy into the building as well. Partnership, you know, works both ways.”

In addition to his career as a rapper, producer and head of entertainment firm Roc Nation, Carter has business interests in sectors ranging from clothing to sports and cannabis products, among others. Though he was widely reported to have purchased Armand de Brignac in 2014, he has been an investor in the brand since its inception.

It all started after Frédéric Rouzaud, managing director of Louis Roederer Champagne, was asked in an interview with The Economist in 2006 whether the popularity of its Cristal brand among rappers could hurt the image of the drink. “That’s a good question, but what can we do? We can’t forbid people from buying it. I’m sure Dom Pérignon or Krug would be delighted to have their business,” he said.

Carter responded by banning Cristal from his 40/40 Club sports bar in New York City. “I view his comments as racist and will no longer support any of his products through any of my various brands,” he was reported as saying at the time. To emphasize the point, that year’s video for “Show Me What You Got” showed Carter sending away a bottle of Cristal, as an assistant proffers a bottle of Armand de Brignac.

Carter never appeared in ads for the brand, instead opting for organic placements — like his appearance with his wife Beyoncé at the Golden Globes last year, when his bodyguard carried several bottles of its signature Brut Gold, which retails for $320 a bottle. Ironically, Moët & Chandon is a longtime official sponsor of the event.

“Jay Z never put himself forward. In fact, the majority of consumers are not aware that Jay Z is the owner of the brand,” Schaus said. “He operates behind the scenes. He really orchestrated the brand, he developed it. He made sure it was in the right places at the right time.”

On Instagram, Armand de Brignac markets itself as the #DrinkofChampions, and is pictured in the hands of sports stars like LeBron James, celebrating the Los Angeles Lakers’ 2020 NBA championship win, and Megan Rapinoe, toasting the 2019 World Cup victory of the U.S. women’s national soccer team.

“Jay Z likes to say that the Champagne itself is like a winner’s cup,” Schaus said.

There are four other cuvées in the range — a Rosé, a Demi Sec, a Blanc de Blancs and a Blanc de Noirs — with prices going up to $800, making it twice as expensive on average as Dom Pérignon, the market leader in the prestige Champagne segment, according to Schaus. Armand de Brignac also produces the world’s largest bottle of Champagne, the 30-liter Midas, weighing almost 100 pounds.

Unlike Dom Pérignon, which produces millésimes for particular years, Armand de Brignac is made using a blend of three different grape varieties from several years. Production is in the hands of Cattier, a Champagne house run by the same family for 13 generations.

“Each bottle is finished by hand with the application of French pewter labels and hand polishing. A small and highly skilled team of just 18 people touch a bottle from pressing the fruit to departure from the cellars in France,” the brand said in a joint statement with Moët Hennessy.

The label sells 500,000 bottles a year worldwide. North America and Asia account for around a third each, with Europe representing a little less. By comparison, LVMH sold 64.7 million bottles in 2019. Schaus declined to give a figure for 2020, but said Moët Hennessy performed slightly better than the Champagne sector as a whole, which saw sales fall by 20 percent.

“Every market was down except for the United States, but significantly less than one might have expected,” he said, noting that people switched to drinking at home. Organic revenues in LVMH’s wines and spirits division declined by 14 percent last year to 4.7 billion euros, while profit from recurring operations was down 20 percent to 1.4 billion euros.

The group’s partnership with Carter comes as a growing number of celebrities launch their own alcoholic beverages. Cameron Diaz, Post Malone, Snoop Dogg and Kylie Minogue are among those who have entered the wine business, while Kendall Jenner, Nick Jonas and Dwayne Johnson recently launched tequila brands in the hopes of emulating the success of George Clooney, and Cindy Crawford’s husband Rande Gerber, who sold their Casamigos brand to drinks giant Diageo in 2017 for $1 billion.

LVMH has also sought to add some celebrity glitz to its operations in recent years, temporarily appointing Lenny Kravitz as creative director of Dom Pérignon in 2018 — not to mention its partnership with Rihanna on a cosmetics range and a clothing line, though the latter has since been paused. Schaus said the growing involvement of celebrities was “super positive” for the category.

“The wines and spirits market is increasingly cool, whereas before, it was seen as somewhat dusty and conventional,” he remarked. “The fact that all these people are taking an interest in the sector is terrific. Through their investment and the energy they are putting into it, they are giving visibility to the category. That’s also very positive. Having said that, not everyone is pursuing the same degree of excellence.”

While it was initially distributed mainly through nightclubs, Armand de Brignac is now available in selected restaurants and wine stores, and has received positive reviews from industry publications, the executive noted.

“They have very good ratings, they are respected as winemakers,” he said, countering those who have caricatured Ace of Spades as the hip-hop Champagne.

“It’s much more than that. It’s a Champagne that represents success, power, high energy and celebrating life. We’ve had many discussions with Jay Z about the fact that for him, it represents success, in particular his success as a self-made man. He’s always wanted the best of everything. He wants the best cars, the best watches, the best houses — and naturally, the best Champagne,” Schaus said.

“He never thought it would become such a big brand. He didn’t create this brand to make money. He did it because he loves Champagne and he wanted to develop a brand that reflected his pursuit of excellence,” he added, popping the cork on a bottle of Brut Gold. “You can’t talk about Champagne without tasting it, as I’m sure you will agree. It would be just absurd,” he said with a smile.

Since LVMH will only be able to ramp up physical production gradually, given the minimum aging period of three years for the Champagne, its focus initially will be on ensuring Armand de Brignac is available in all the right places — including, presumably, the properties of its luxury travel division Belmond, which include the Venice Simplon-Orient-Express train and hotels such as the Copacabana Palace in Rio de Janeiro.

“Our dream customers are high-net-worth individuals who will choose Armand de Brignac to treat themselves, to celebrate and to express themselves through the daring choice of an exceptional bottle of Champagne,” he said. “It’s unique. No other bottle in the entire wines and spirits sector looks like it, so when you take a picture of yourself with Armand de Brignac, you’re sure to be recognized as discerning.”

The deal is set to reverberate beyond the company’s Champagne division.

“We are extremely pleased with this partnership. It is intellectually enriching and will help us understand different ways to market and develop a brand. What Jay Z and his teams have done is absolutely exceptional and breaks the mold for marketing wines and spirits,” Schaus said. “Beyond the project itself, it also injects modernity and energy into Moët Hennessy and LVMH.”

Toast the New Year With a Celebrity-backed Beverage