The campaign titled ‘Ini Venda Vittuveezhcha’ contains a series of illustrations put out by the Department of Women and Child Development in Kerala.

The illustration shows two young women – one wearing a t-shirt, jeans and an overcoat, the other wearing a short green dress. Labels on top of both the women say ‘Decent clothing’. A caption underneath says, “It is not the dressing that should change, it is the outlook.” The work is a direct dig at the victim-blaming argument that women have been fighting for ages – “it is the women’s clothes that brought on the attack”.

It is one in a series of such illustrations put out by the Department of Women and Child Development in Kerala, for a campaign ‘Ini Venda Vittuveezhcha’ – which translates to, ‘No need of compromise anymore’.

“It began as a continuation of the parenting campaign the department had launched some time ago, and seeing its reach, we decided to go on with such campaigns for women and children. Every year we do outreach activities in schools and activities since gender is a concept that should be taught early among the youth. This time, there has been a gap [with the lockdown] and we thought of starting the campaign when the courses reopened,” says Anupama TV, director of WCD.

The campaign began a week ago and depicts several difficult situations women go through. One of the first images shows a girl with a book in her hands and two captions. One on top that is crossed out reads, “Girls need to study only so much”. The other corrected one below says, “Let girls decide how much they want to study.” 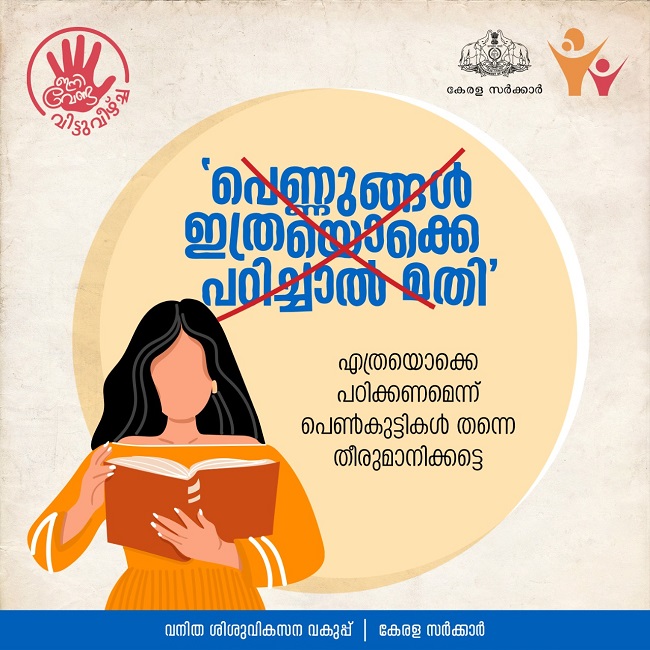 Another illustration has a woman moving the needles of a large clock to uncover a moonlit sky. The title alongside says, “Asamayamalla ithu asamathvam” – meaning this is not improper time but inequality. A caption says, “One should not deny freedom to women in the name of security but make nights safe for women.” 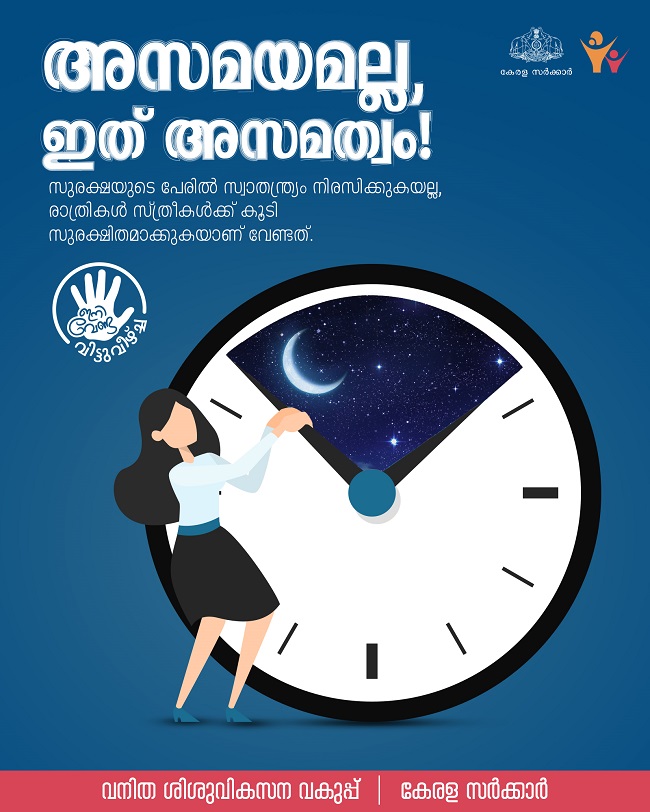 There is also a video post on the WCD page, depicting the laws against sexual harassment at the workplace.

“There are more of these campaigns coming. It was conceived on Nirbhaya Day (December 16) and will go on for at least a month following Women’s Day (March 8). Since we have several mechanisms – such as women protection officers and nodal officers – in place to address the various grievances of women, we are aware of the legal and social issues they endure. The campaigns are designed to address these,” Anupama says.

The newest in the series of ‘Ini venda vittuveezhcha’ is a strongly depicted illustration against moral policing, a hammer striking the words ‘Sadachara gundaism’ (moral policing) and the words above saying ‘Do not allow’.

The campaign has been received mostly positively so far, Anupama says. “The criticism that comes should also be discussed. That way it will be a healthy discussion on these topics that need attention.”