The fabricated flowers that adorned these dresses and many of Lowe’s creations were inspired by the days of her childhood spent folding her mother’s seamstressing scraps into roses. Born in Clayton, Alabama in 1898, Lowe came from a family of seamstresses. Her grandmother, Georgia Cole, was an enslaved dressmaker for her plantation mistress before she was freed in 1860, and her mother, Jane Lowe, specialized in embroidery. National Museum of American History Curator Emeritus Nancy Davis has said, “She learned from them. She was really gifted, but she was also part of this lineage of seamstresses… and really capable ones.” Georgia and Jane sewed for the first families of Montgomery, and Ann spent much of her childhood at the foot of their sewing tables, piecing together what would become her signature floral adornment. When Ann was 16 years old, her mother passed away, leaving behind four unfinished ball gowns for the First Lady of Alabama. A young Ann finished the gowns, and from them her passion for high society design sprang. 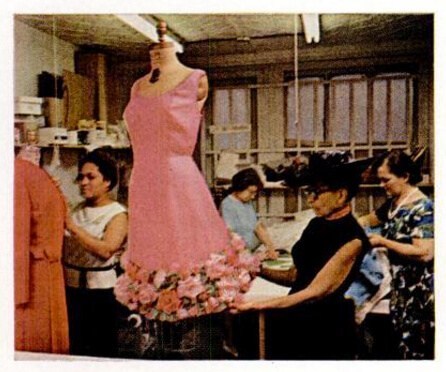 Three years seamstressing in Alabama later and Lowe had acquired a reputation and portfolio worthy of an acceptance to New York’s S.T. Taylor Design School. She began classes in 1917, but as the only Black student in the school (a fact unbeknownst to the administration until she arrived) Lowe was segregated from other students, entirely isolated throughout the course of her studies. This treatment did not deter her though, and immediately following graduation she became the head of a leading Tampa, Florida dress shop where she saved $20,000 before moving back to NYC in 1927 to open the first of three NYC locations. The first was in Harlem and called Ann Lowe’s Gowns, for Manhattan’s social elite.

News of her exquisite sartorial skills spread across the city, but so did the fact that Lowe charged close to nothing for custom work. A client of Lowe’s told Ebony magazine in 1966, “Lowe dresses are worth more than they cost. They are works of art, timeless, feminine, beautiful, always the most flattering gown a woman could choose.” Lowe may have been leading her dream of fashioning society’s crème de la crème, but her own position within society as a Black woman made it easy for those same wealthy clients to take advantage of her, much like in the case of Kennedy’s wedding dress. Other American fashion houses such as Chez Ninon, the label that created line-for-line recreations of French designer looks for Kennedy, were a widely-known beacon of couture. The First Lady’s patronage made its Upper East Side salon a beacon of couture, and its founders, Nona McAdoo Park and Sophie Meldrim Shonnard, were seen amidst their high-profile clients at fashion shows. Lowe, however, did not get the same acknowledgement or invitations.

Lowe undercharged, customers underpaid, and her name was removed from conversations about her own work. Actress Olivia De Havilland wore an Ann Lowe gown to accept her Oscar for Best Actress in the film To Each His Own in 1947, and like many of Lowes clients, removed the back interior name tag demarcating it as a Lowe dress before wearing it to the awards ceremony. But Lowe never complained. She was more interested in the creation of her clothes, knowing who wore them, and where, than she was in making a profit.