William Pesek is an award-winning Tokyo-based journalist and author of “Japanization: What the World Can Learn from Japan’s Lost Decades.”

“Only when the tide goes out do you discover who has been swimming naked.”

There is no better lens than Warren Buffett’s famed dictum through which to view Asia’s 2020. If ever there were a year when hidden risks were laid bare by adverse conditions, it is the pandemic-wracked one that, mercifully, ends tonight. And if any region saw a bull market in skinny-dipping among leaders, central banks, chieftains and entire economic systems, it is Asia.

These miserable 12 months were not without winners and a few highs now and again. Case in point: the arrival of COVID-19 vaccines. Taiwan’s Tsai Ing-wen beat the odds to win another term, much to the chagrin of Xi Jinping’s China. What is more, the skilled COVID-19 responses led by President Tsai and New Zealand Prime Minister Jacinda Ardern put much bigger economies — almost all run by men — to shame.

China and South Korea ended 2020 in the black, growth-wise, proving that only by taming the coronavirus can the globe’s top economies recover. K-pop sensations like BTS and Blackpink went global in ways Asian acts never did before. Smash-hit film Demon Slayer reminded us that Japan’s cultural-export prospects are alive and well.

Asia’s e-commerce boom got a big assist from a pandemic forcing billions of people to shelter in place. China’s Alibaba Group Holding and JD.com had banner years. Around the region, emerging platforms like Tokopedia, Grab, Gojek, Bukalapak, Shopify and Sendo set records for web traffic and sales.

And few in Asia were unhappy to see Joe Biden defeat Donald Trump. Even if a Biden White House keeps the pressure on Beijing, Asia can look forward to a U.S. leader who treats Asians as partners, not marks to be shaken down and harassed via Twitter.

Overall, though, 2020 was a decidedly grim time worthy of clear-eyed reflection and more than a little snark. So, without further ado, it is time to commemorate — expose, more to the point — the many emperor-has-no-clothes moments accessorizing Asia’s year. Drum roll, please! 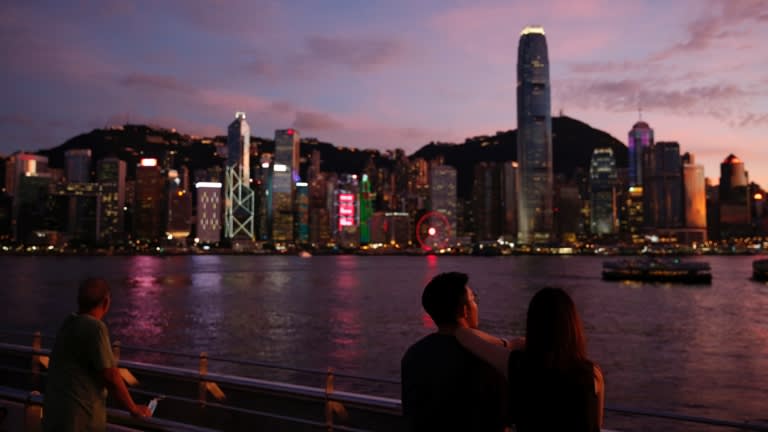 Jack Ma: Think you had a rough year? Spare a thought for the guy who began 2020 as the face of the new China. The Alibaba founder was the kind of homegrown success Xi’s party loved to tout — the personification of a high-tech China owning the future. Ma’s Ant Group initial public offering, slated for November, was to be history’s biggest, leaving Wall Street looking East with envy. Then Ma gave a speech criticizing a regulatory system stifling innovation. The IPO was shelved, costing Ma $12 billion in two months. Ma’s status is now a mystery as Xi reminds us capitalism is not China’s thing.

Asia’s poor: Of all the 2020 entries into the global lexicon, “new COVID poor” may be the most costly. The World Bank warned of the triple shock involving the trade war, COVID-19 and deep recessions that carry over into 2021. The Asian Development Bank said the pandemic could push another 160 million people into poverty across the region. Asia’s poverty rates, in other words, are rising broadly for the first time since the 1997-1998 financial crisis. Sadly, few governments are devising bold and proactive steps to limit the damage. Hopes for a recovery in 2021 are already grim.

Trump’s pal Abe: No world leader threw his arms around Trump earlier or more assertively than former Japanese Prime Minister Shinzo Abe. It was always a terrible look. Trump’s only other pals are Russia’s Vladimir Putin, Turkey’s Recep Tayyip Erdogan and North Korea’s Kim Jong Un. But Abe’s bet on Trump yielded negative returns. Trump left Abe at the TPP altar and refused to give Tokyo a pass on tariffs. He tried to extort Japan, Tony Soprano-style, for $8 billion per year to host U.S. troops. He coddled Kim. The only good news for Abe’s successor Yoshihide Suga is that Biden will soon make Trump history.

Bitcoin bears: When you win over Nouriel Roubini, cryptocurrency bulls may be on to something. The New York University economist is best known for predicting the 2008 subprime-debt crisis. And he still has a point that a monetary unit of uncertain provenance with no backing from a central banking institution seems more pyramid scheme than medium of exchange. Yet, as prices surge and central bankers — many here in Asia — tiptoe toward issuing their own digital currencies, even Roubini now says bitcoin is “maybe a partial store of value.” What the future holds is anyone’s guess. But the last 12 months were humbling for crypto skeptics as Asian punters doubled down.

Central bankers: It is a dismal moment for monetary-policy independence. From Jakarta to Manila to Mumbai, officials were under intensifying pressure to refill the proverbial punchbowls. In Seoul, the Bank of Korea confronts calls for a change in mandate that prioritizes fighting unemployment. Such moves are one thing during a pandemic. Yet compliant central banking takes the onus off governments to spur innovation and increase competitiveness. As attempts to avoid politically-sensitive economic upgrades go, this gambit seems particularly, well, naked.

Xi’s legacy: Though Xi put Trumpian chaos and distraction to good use in 2020, he racked up a whole lot of own goals. His Hong Kong crackdown turned more Taiwanese toward independence and angered the U.K. Xi’s bullying behavior toward Australia left many aghast. The suppression of the Uighur Muslim minority in Xinjiang made headlines, as did deadly brawls at the disputed China-India border. The biggest failure was COVID-19. Xi’s opacity sowed greater distrust in the Chinese system. The Trump era was a once-in-a-lifetime opportunity to increase China’s soft power at America’s expense. Beijing blew it.

Asia’s strongmen: The region’s supposed tough guys gave authoritarianism a bad name in 2020. For all their big talk of getting epochal things done, neither Rodrigo Duterte of the Philippines nor Narendra Modi of India nor Prayuth Chan-ocha of Thailand proved any match for a global slowdown. Their economies folded like paper tigers. Xi’s big talk of curbing the size of the state sector saw little action. In Myanmar, Nobel laureate Aung San Suu Kyi won reelection by allying with the military leaders who once held her under house arrest — a bad omen for democracy. But par for the course in Asia this year.

Japan’s Buffett: No list of 2020’s highs and lows is complete without touching on Masayoshi Son’s roller coaster of a year. The man often called the “Warren Buffett of Japan” started out licking his wounds from a disastrous bet on startup WeWork. He then spent months selling off $80 billion of assets to stabilize his Vision Fund. Son ends the year the toast of Tokyo thanks to an expected windfall from DoorDash’s IPO. Yet Son has yet to explain what is in store for 2021 and beyond as he dresses SoftBank up like a giant hedge fund — in very un-Buffett-like ways.

It is hard to think of another 365-day period that produced such a bull market of thrills, spills and dramas in Asia. It is equally hard to name a time when the year ahead seemed more uncertain. Yet one thing seems clear: If anyone tells you they know what is afoot for 2021, demand that they prove they are wearing something beneath the waves.