Angelina Jolie is currently in the midst of a custody battle with ex Brad Pitt over access rights to five of their six children.

On Saturday the 45-year-old actress was seen shopping with their daughter Zahara, 16, in Los Angeles as they hit up a Nordstrom.

For the mother-daughter outing Jolie looked effortlessly elegant in a white linen dress and a trench coat as they enjoyed some retail therapy. 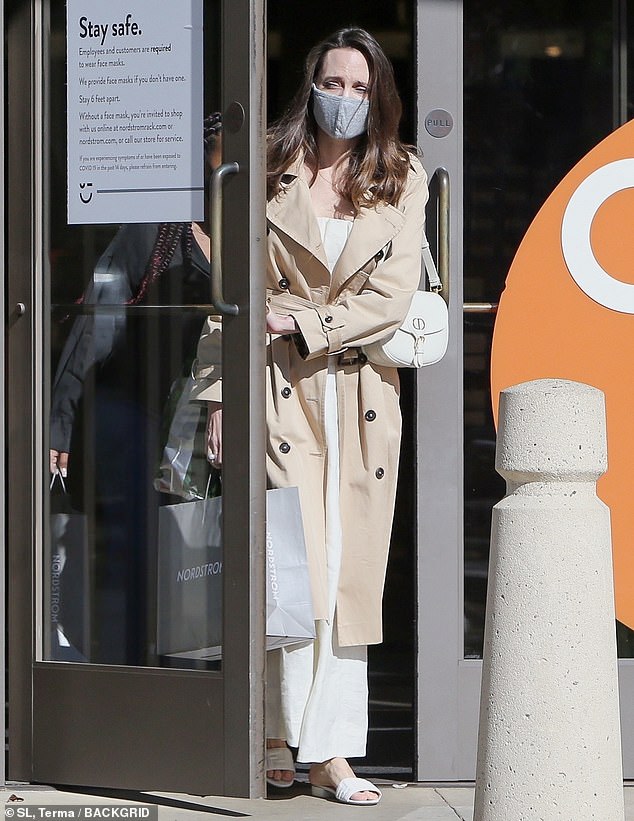 Shopping trip: Angelina Jolie, 45, looks classic in a white dress and trench coat as she steps out with daughter Zahara, 16, for a shopping trip in Los Angeles amid her ongoing custody battle with ex Brad Pitt

The Maleficent actress emerged from the department store in the ankle length dress and a pair of white sandals with a kitten heel.

She layered up with a classic coat and draped a white Dior bag over her shoulder, as she carried a bag full of clothes.

Jolie was masked up for the outing and wore her signature brown tresses down.

Zahara kept it casual in jeans and a black blouse with a pair of black Air Jordan’s on her feet as they spent some quality one-on-one time together. 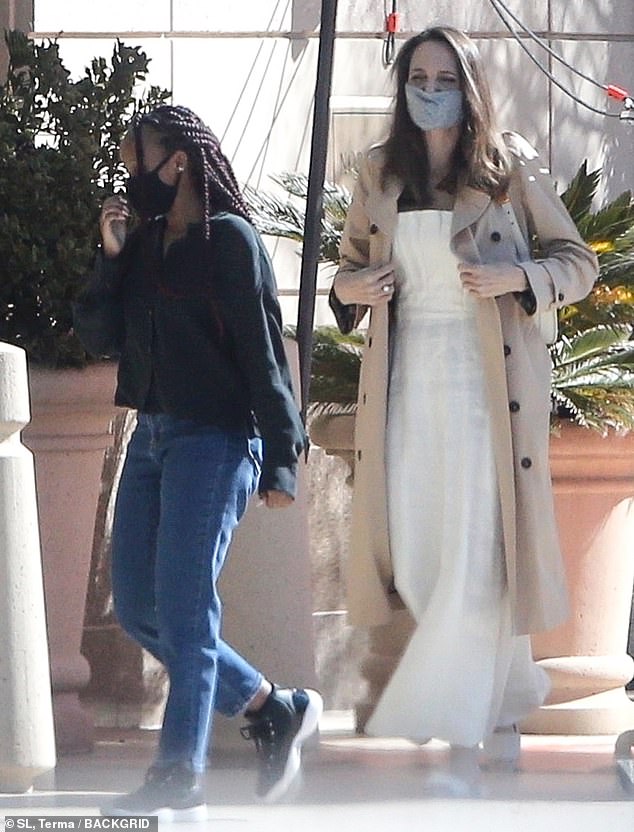 Quality time: The Maleficent actress spent some quality time with her daughter as they hit up a Nordstrom, both emerging with a bag full of stuff

The duo were seen making their way to a black SUV as a handsome bodyguard assisted them with their purchases.

The outing comes amid a lengthy custody battle over Zahara, Pax, 16, Shiloh, 14, and twins Vivienne and Knox, 12, with Pitt and Jolie also still trying to finalize their divorce after two years of marriage.

Angelina filed to absolve their marriage in 2016, saying in a June 2020 interview with Vogue India that it was for ‘the well-being of my family,’ adding ‘it was the right decision.’

It was reported at the time that Pitt had gotten into an alcohol-fueled violent screaming match with Jolie, prompting eldest son Maddox, 19, to defend his mother.

Jolie was granted temporary custody over all six children and Brad was granted visitation rights with a court-appointed therapist present. 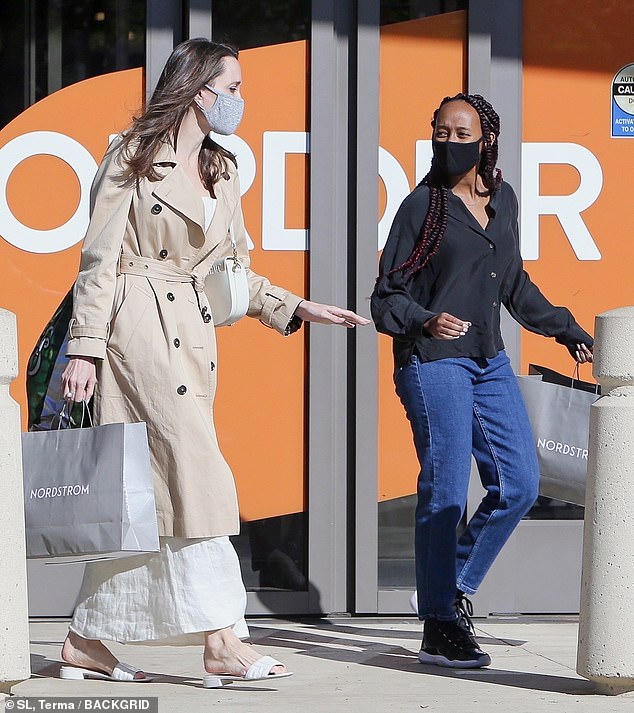 Fiercely protective: Jolie is currently at war with Pitt over custody over five of their six children after being granted temporary full custody of them upon filing for divorce from Pitt – which has yet to be finalized – in 2016

In 2018, a court ruled in favor of Brad after he alleged that Angelina was preventing the children from having a consistent relationship with him. He was given a temporary summer custody that allowed him to spend time with the kids without Jolie present.

She then alleged that summer that he had not been paying ‘meaningful’ child support for over a year, with Pitt retorting that he had loaned Angelina $8M and given an additional $1.8M to help with bills.

The custody trial was supposed to begin in November 2018 but the two reached an agreement instead, with ET reporting that it was in the best interest of the children and eliminated the need for a trial.

Pitt was granted less than 50 percent custody of the kids despite wanting equal joint custody, prompting him to continue fighting for what he saw fit in another trial. 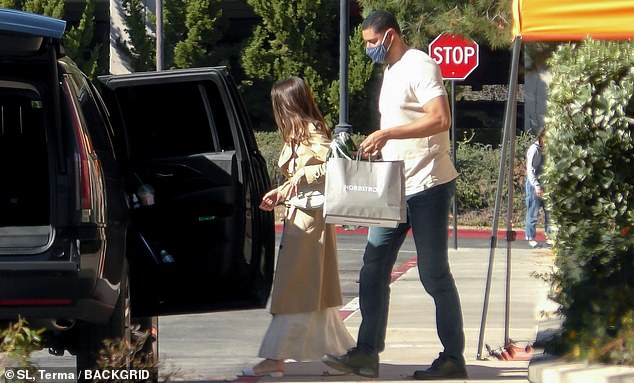 Ongoing battle: Pitt was less than satisfied with being granted less than equal joint custody over their kids prompting him to take Jolie to court in October in the hopes of being granted 50/50

The pair were ruled ‘legally single’ in April 2020 but the status did not finalize the divorce or the custody battle.

Brad continues to seek joint custody with a trial  that was scheduled for October, as he compiled a list of over 20 witnesses to strengthen his case.

The couple had already decided that Maddox was not a custody consideration and could decide when he wanted to see Brad as he was no longer a minor.

Many details of the trial have been kept under wraps, though a decision was purported to be expected at their next trial which was scheduled for December 21. 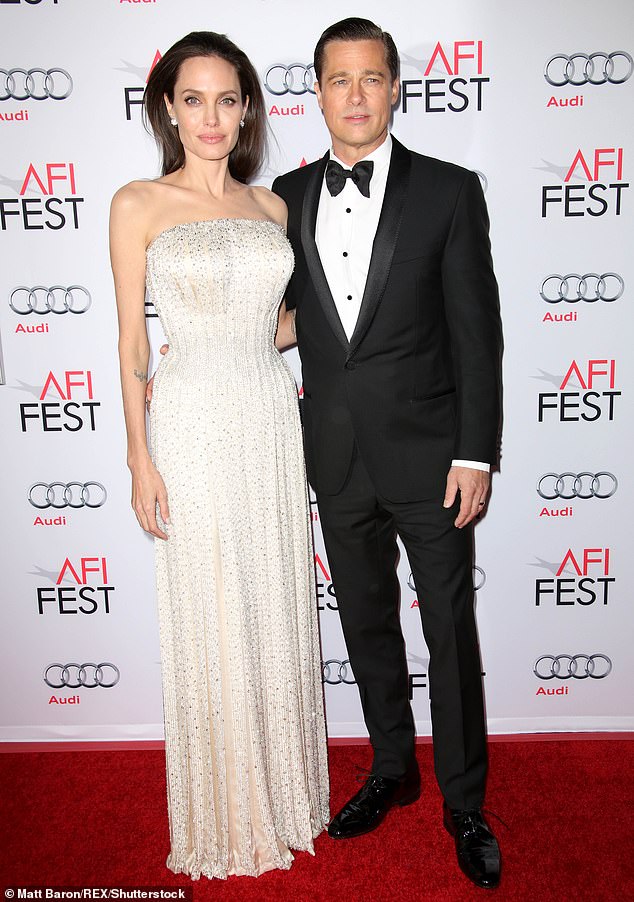 Unresolved: The custody battle continues to remain unresolved though it was reported that Pitt was able to spend the Christmas holiday with their three biological children Knox, Shiloh and Vivienne; pictured 2015