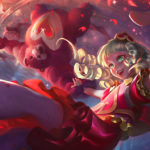 Annie is one of the original six League of Legends champions. She was the first champion to reach 12 skins but was later surpassed by Ezreal and Miss Fortune.

Although Annie went through a number of small kit updates since the game’s release, her core have abilities remained the same. She’s a solid mid laner to pick up if you’re new to the role and can teach you the basics of last-hitting, farming, and positioning with her easy-to-use abilities.

She currently has 13 skins to choose from, including her original one. There’s various themes to chose from such as Gothic, Steampunk, Winter Wonder, and more. She’s one of the few champions to have so many skins, so finding the suitable one shouldn’t be a problem.

Here are the five best skins available for Annie in League of Legends.

Released in 2009, Goth Annie is one of the most rare skins in the game, sporting a neon and scary look like something from a horror movie. This skin is one the four Collector’s Edition skins and is no longer obtainable by players. Other skins from the bundle include Black Alistar, Silver Kayle, and Young Ryze.

To this day, there’s not many Goth-themed skins, with Annie being one of three Goth skins alongside Emumu and Gothic Orianna. If you see someone with this skin, know they’re using one of the rarest skins in League and have most likely been playing since the early days of the game. It may be better to avoid ganking them if they’re on the opponents’ side.

Released during the 2015 Valentine’s Day alongside Heartseeker Varus, Sweetheart Annie is charming and boasts the spirit of the holiday. Tibbers is seen without sharp claws for the first time in this skin and is a lovely companion instead of a fearless bear. This is one of the few light-hearted skins Annie has and is perfect if you want to play with vibrant colors.

This skin is great for the holiday and while it costs only 750 RP, it does require you to wait for the Legacy Vault to be back or get lucky with your chest rolls to pick her up. Sharing the theme with other various champions, Annie can be the centerpiece of a Valentine’s Day composition in the mid lane.

Hextech Annie gave the champion a steam punk look alongside a metal Tibbers. The skin has smooth animations and is used by players who collected 10 gemstones. The skin references BioShock with Tibbers being the Big Daddy and Annie the Little Sister.

If you have the gemstones and want to feel exclusive, acquire this skin. The skin has new animations, clothes, and bright blue particles for all her spells, similar to other Hextech skins. Featuring smooth animations and a great backstory, this skin is the one to go for if you want a unique look for Annie.

Reverse Annie hit the shop in 2011 to spice up the champion by swapping her and Tibber’s places. Annie is in an adorable Tibbers onesie, while Tibbers is wearing Annie’s clothes. There’s also a reference to the infamous Annabelle doll held by Annie.

This skin isn’t tied to any crafting system or the Legacy Vault, allowing you to pick whenever you please for the price of 975 RP.

This Halloween-inspired skin offers Annie players the possibility to dive into the Frankenstein universe. Annie is seen with a a black and white haircut and a lovely pink dress, and Tibbers zaps his enemies while resembling Frankestein.

FrankenTibbers Annie is tied to the Legacy Vault and costs 975 RP. If you want to have a chance to experience the Frankenstein universe yourself, you’ll either have to be patient for the vault to return or get lucky with your chest rolls.